CANNABINOIDS ‘A DAWN OF DISCOVERY’ 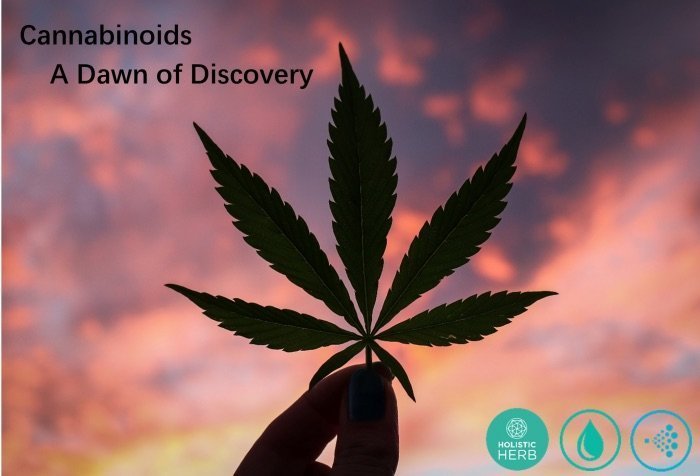 Part I in the series

Hemp which is the same species of plant as cannabis still remains one of the most versatile crops available to us with over 50,000 know uses including food, medicines, biofuels, paper, biodegradable plastics and textiles to the Cannabidiol (CBD) Oils and medicines we see today. Hemp is easy to grow, grows fast, requires no pesticides, enriches the soil it is grown on, is adaptable to soil and climatic conditions, provides a good break crop for the farmer, giving the land a rest from other crops and helping to prevent disease.

Up until the last century hemp has been one of the most important crops for mankind and was amongst the first plants to be cultivated for textile fibre. In China, Imprints of hemp fibre have been found in pottery shards that are 10,000 years old and remanants of hemp cloth dating back 8,000 years were discovered by archeologists in Mesopotamia (modern day Iran & Iraq). Hemp is also one of the earliest examples of human industry with Emperor Shen Nung (28th Century BC) referenced in a Sung dinasty (500 AD) document that shows how to cultivate hemp for cloth.

Here in the U.K. hemp used to be a very common crop, so much so that in 1535 Henry VIII made it compulasarry for all farmers to sow a quarter of an acre of hemp for every 60 acres they owned. Being inheralantley stronger than cotton, hemp has three times the tensile and flexible strength, uses less water and agricultural land making it ideal for sails and ropes and exremely useful for the Navy and maritime industry in that period.

More often than not the confusion between industrial hemp and marijuana/cannabis is based on their visual similarities. Industrial hemp is high in fibre and very low in probably the most imfamous of all the 150 plus cannabinoids, THC (tetrahydrocannabinol), this is the psychoactive cannabinoid.

In this series blogs we will follow the history of cannabinoids and their discovery. Given the widespread use of hemp over many centuries and cannabinoid’s medical potential, it is astounding to see how this neglected industry has deteriorated to a point where people still only see a plant that “get’s you high”!

Although we cannot attribute a single one cannabinoid to O’Shaughnessy he is remembered as the doctor who introduced cannabis to Western medicine, in 1839 he produced a 40 page paper that included a review of the medicinal history of cannabis by Persian physicians in India and the Middle East. He was also the first to conduct clinical trials with preparations of cannabis based on native remedies. One of these remedies was given to a 40 day old baby who presented with convulsions, the baby is said to have responded well and was reported as being near to death to showing “the enjoyment of robust health” in a few days.O’Shaughnessy was born in Limerick in 1809, he was admitted to the University of Edinburgh in 1827 and studied medicine, chemistry, and forensic toxicology. Obtaining a commission as an assistant surgeon with the East India Company he arrived in Calcutta in 1833. Over the next few years he produced the first English textbooks of Indian medicinal plants the Bengal Dispensatory (1841-42) and the Bengal Pharmacopoeia (1844).

He said of cannabis research, “My object is to have it [hemp] extensively and exactly tested without favour or prejudice, for the experience of four years has established the conviction in my mind, that we possess no remedy at all equal to this in anti-convulsive and anti-neuralgic power.”

Without O’Shaughnessy’s enquiring mind we may not have or be able to buy CBD Oils and other CBD products including Holistic Herbs CBD Oils and Sprays that we enjoy today.

Rather strangely this ‘cannabis resin’ appeared to be abundant in CBN which as we know today is found in relatively minor concentrations in fresh cannabis. It is therefore thought that they were working with old samples of hashish as THC oxidizes to form cannabinol, (CBN).Working with two kilograms of concentrated cannabis resin Wood and his colleagues were able to extract two terpenes, (aromatic oils that give plants such as cannabis their distinctive aromas) and a toxic red oil. As this red oil appeared to make up around a third of the resin they incorrectly reported that, “this substance must be regarded as the active constituent of the plant”, and although they could not precisely map out it’s chemical formula they did give it the name Cannabidiol, (CBN).

Unfortunately because of this the Cambridge Groups work was largely ignored over the following decades as numerous groups tried and failed to repeat their findings and the historical kudos of discovering the first cannabinoid had been lost to them.

In 1932 he published Cannabis Indica resin. Part III. The constitution of cannabinol in which he expressed the partial structure of CBN (fig 1). Cahn also prepared cannabinol derivatives, testing them with colour forming reactions and culminating in a close yet incorrect structure prediction for cannabinol (Cahn 1933). It was not until 1940 that he was able to show CBNs full molecular structure (fig 2).Best known for his contributions to chemical nomenclature and stereochemistry many attribute Cahn with the discovery of Cannabinol (CBN), However,  British chemist Cahn was reinvestigating the findings of The Cambridge Group in the 1930’s and was the first to provide evidence that the cannabis plant contains many different compounds that we now know as cannabinoids or phytocannabinoids.

Select the fields to be shown. Others will be hidden. Drag and drop to rearrange the order.
Compare
Compare ×
Let's Compare! Continue shopping